To Serve and Protect

I'm doing the only thing I know to do when you've been sucker-punched by a painful comment from a trusted place -- I'm blogging about it.

Church should never be a place that sends you spiraling back into the vortex that is grief.
But it was, and it did.

I'm still in the vortex, clawing at the walls to gain altitude and breathe fresh air.
And so I write.
Grief, I'm told, is more bearable when you share your story.

It's about a good man, gone too soon. Not a perfect man, but a man with a sincere heart and an unwavering moral compass. A man who wore blue and prayed for angels to surround him and handed out junior sheriff's badges to kids who still held the law in high regard.

My husband.
My late husband.

Imagine what it feels like to have his life's calling bashed in a sacred space called the church.
From a voice who never knew my Roger, but who painted him anyway with a broad brush of fear and distrust.

Roger served the public with a blend of reverence and pride; he often came home, tired but satisfied because he'd helped a man locate his car in the vast mall parking lot. Or maybe he'd deputized a youngster at a lemonade stand, swigging down the tepid mix and encouraging those kids to "keep the neighborhood safe", giving out those plastic badges like they were the real thing.

Maybe, on some particular day, my no-nonsense policeman husband had noticed a couple of  joy riders burning up the highway and reprimanded the youngsters they were not, in fact, invincible and that speeding puts innocent motorists at risk, too. Possibly he left them with only a warning and a solemn charge to go home safely to their families.

However his day unfolded, mostly a collection of routine bits, my Roger was grateful he could serve and protect the public. He'd often say, "I can't believe I get paid to do this". And he meant it.

Sure, there were dangerous days and there were soul-crushing days, like the afternoon he found a newly-minted driver, a 16-year-old girl, slumped over the steering wheel, in a ravine. She was dead. The memory haunted him.

"Maybe I could have gotten there a few minutes earlier," he lamented. "Maybe I could've saved her."
I'd reminded him he, too, was not invincible and he wasn't Superman; he was a good guy with a big heart and a badge, and he patrolled in a world filled with poor decisions and imperfect traffic patterns and impaired drivers and broken, defeated people.

That's where he shone his brightest light, his unfathomable hope: into the cracked and shattered lives of broken people.

There was the elderly widow in the most remote part of the county, who lived alone. He had answered her frightened report of a possible burglar on the property. After discovering no intruder, Roger noticed her window panes were sorely inadequate against the cruel gusts of November -- large cracks had been covered up with cardboard, which shuddered in the wind. Quietly and without fanfare, he went to Home Depot and bought new windows with his own money. On a Saturday while off duty, he drove to her home and replaced her windows.

With a playful spirit, Roger took holiday work assignments in stride: Stuck working on Christmas morning, he sported a Santa hat and gave out candy canes at traffic stops. He was all about peace on earth and good will toward men. He personified it.

And then there was Columbine.

The mass shootings re-configured the entire face of law enforcement, causing some officers to give up their badges. No amount of training had prepared them for the unfathomable. For Roger, the event shifted him into someone with a more steely edge, a shadow of wariness, a hint of sadness, a festering wound that could not heal completely. It was as though a mantel of steel rose up around him, cautioning him, obscuring some of the joy.

He retired to what would be five great years on a farm property, driving a tractor, hauling horse trailers to 4-H shows, putting up hay and reconnecting with family back east.

His heart, his generous and boundless heart, burst in one last effort to stay with us. On the death certificate it reads "Acute Aortic Occlusion".

"His heart exploded," the coroner explained.

And it did. It discharged light and detonated arguments. It was big enough to hold so much love for me and the girls.

His big German-Farmer-Policeman heart was beating for us at his final breath.

In a Legacy Book my niece crafted for me, there are condolence letters; many of them from the Sheriff's Department. I'll leave you with a snippet, a brief glimpse into Roger's lawman legacy.

I'm actually grateful, for once, that he was not sitting beside me on that Sunday morning, his large hand dwarfing mine in a warm grip. I'm glad, because the comment would have built yet another layer of steel around that huge heart of his. 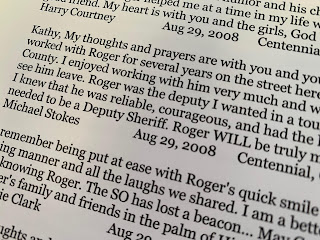