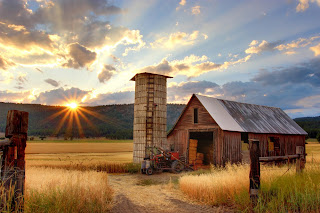 "O God my rock." I cry. "Why have you forgotten me? Why must I wander around in grief, oppressed by my enemies?" Their taunts break my bones. They scoff, "Where is this God of yours?" Psalm 42:9-10

It started as a small sliver of aggravation and grew into an impossible mass of resentment: my marriage was in a fragile place and I was painfully aware of my part in it.

Dial the clock back to 2004 – the year my husband decided it’d be a good idea to move away from our beloved Colorado to the hills of Pennsylvania.

“We’ll have a farm property,” he said.

“We’ll give our daughters the rich heritage of taking care of animals and driving a jalopy. They can chase fireflies and row across the pond. We’ll camp out and have bonfires and do all the things we got to enjoy as kids.”

He was thrilled at the prospect; as for me and the girls … not so much.

A wise woman at my Colorado church counseled me: “Kathy, you need to follow your husband. Even if he’s making a mistake. Roger is the spiritual leader of your family and it’s always best to honor that commitment. Don’t let this drive a wedge in your marriage.”

I’ll always remember Monita’s gentle caution, her loving words to me – such a tender reminder in a counter-culture that rejects the notion of wives accepting the leadership of their husbands.

We made the 15-hundred mile trek. One car and a moving truck, bursting at the seams with all our worldly goods. We were pioneers, but in my mind we were heading in the wrong direction -- backwards, to a life I'd left in my past.

We swapped our newer home in the suburbs of Littleton for a 100-year-old farm house on the top of a hill.

In the middle of nowhere.

This wasn’t my dream; it was his.

At first, I managed a fake bravado, encouraging our daughters to make new friends and dream new dreams. I even came alongside my 6-foot-2 gregarious husband to host a yearly potluck in the orchard, a tradition that would become a much-anticipated event for the neighbors and friends on our rural hill in the woods.

Over time, my façade gave way to a strange, quiet rage.

I know he felt it.

Eventually, we formed a brittle alliance that held together just enough to get by.

It wasn’t healthy. It wasn’t godly. There was little joy in our awkward dance of just-getting-along.

It was a God appointment that I went to lunch one day with a friend, Dorothy, who handed me a smooth stone that fitted right in the palm of my hand.

Etched on that stone was one word: Forgive.

That began to nag at me.

Over the next year, I would receive gentle nudges from Dixie, a woman at our Pennsylvania church: “You need to forgive your husband,” she’d say. It was never delivered as a reprimand or a judgement. Looking back, I know to my core it was her simple obedient act of delivering a message that lay heavy on her heart.

Oh! But I was just not willing to release my right to be upset! Digging my heels in, I did not move toward Forgiveness.

Finally, and maybe after a dozen or so gentle nudges, Dixie sought me out after the church service one Sunday morning.  There was a sense of urgency in her voice.

“Kathy, have you found a way to talk to Roger? You need to forgive him.”

A few days later, on an ordinary day, I asked my handsome German fellow to sit with me in the living room. Haltingly, without fanfare or clever words, I explained how mad I’d been and how I no longer wanted to be held in the grip of fury.

I spilled it all. I held back nothing.

The release of all that bottled up emotion was a huge relief.

He shared, too, and we moved toward each other with a gift I can only describe as unfathomable Grace.

As there was work to be done, we headed to the hay fields. We’d had a soggy summer and much of the baled hay was on the edge of mold; some of it could only be salvaged for mulch.

I drove the tractor and Roger pulled the wet bales up onto the wagon. I remember the sun was setting and it was a spectacle of reds, blues, purples and pinks.

We drove to a neighbor’s barn where the hay would be stored and dried.

With a decisive shudder that huge old barn door was closed on those smelly hay bales.

That was a defining moment for me, for both of us: The creaking and the closing of that creaky barn door symbolized the end of our silence.

It ushered in the beginning of a new alliance as husband and wife.

The putting up of that old hay was a visual for the putting away of all the lost opportunities that had pushed us apart.

We moved forward as a team and the peace that whispered around my shoulders was Supernatural.

We couldn’t have possibly known.

Months later, I found that stone with the little word, “forgive” in my jewelry box.

How I miss him! The ache is ever present, and so is the gratitude.

How grateful I am God got through to my unyielding, stubborn spirit.

He cracked my heart wide open with faithful, persistent voices who spoke into my life.  The light flooded in, the forgiveness flowed and swirled and flung a balm of healing over our family.

Going forward as a widow, it has been a challenging journey. Not what I’d choose.

But, thanks be to God we were able to clear our grievances and embrace life together – no matter how fleeting it would prove.

Like the Psalmist, I end my lament with a declaration of gratitude:

I invite you to look for my coffee table books, the Breath of Joy! series.  So excited to announce the newly-launched volume,  Breath of Joy! Singing Spring.
This blog supports www.booksforbondinghearts.com/shop, timely gifts for all seasons.