Billy Graham passed away today, February 21, 2018. We’ve lost a national treasure, and he has left an indentation on our culture as deeply carved and distinctive as the faces on Mt. Rushmore. It really didn’t matter what faith background you held; this beloved man simply brought the gospel, unadorned, to the masses. He did not worry about seekers, yuppies or progressives, but he did focus on the lost.

And he told us how to be found, loved and eternally secure. He did this, many times through an interpreter and he delivered his simple message all over the globe during a generous lifespan of 99 years. He was the friend to politicians, royals and everyman. He filled stadiums and lit up televisions, yet remained humble.

While sharing the sadness of Dr. Graham’s passing with a friend, I related a wonderful story about the woman who reached heaven before him: Ruth Bell Graham.

On a visit several years ago to see the Billy Graham Library in Charlotte, North Carolina, I discovered an inviting walkway leading to a tranquil, woodsy Prayer Garden. I quickly realized it is also the burial site of Ruth Graham. On her tombstone it says, “End of Construction - Thank You for Your Patience”.

It struck me as funny and deep, all at once. I needed to know the story behind the epitaph. A volunteer explained the Graham family was on a road trip, back when the children were young. Ruth noticed a construction site along the highway.  She was completely drawn in by a large sign announcing in big bold letters, END OF CONSTRUCTION - THANK YOU FOR YOUR PATIENCE.

Ruth turned to Billy, who was at the wheel, and told him she wanted this exact phrase to be on her tombstone. She explained she was a work in progress, and her death would render her complete; finished; the person Christ had designed her to be. Furthermore, a lot of people had to be patient during her journey to completion.

Billy, not knowing she would cross into glory before him, remembered her request. He had that pithy, humorous and deeply profound phrase etched onto her stone.

Nestled among native flowers and situated in a peaceful spot, Mrs. Graham’s parting statement is a beautiful echo of laughter. I was glad to hear the story.

All these years later, I’m comforted to remember it, and to think of Dr. Billy Graham entering heaven with his own hard hat and a tool belt laden with funny stories to share with Ruth. 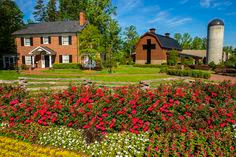 You may also want to read other evangelical writers from the southern U.S. who honor the same Lord that Dr. Graham and Ruth Graham honored. The Whispering of the Willows if a redemptive read by southern author, Tonya Jewel Blessing. I support www.BooksForBondingHearts.com/shop