Sometime back, my mother nudged me into crossword puzzles. I’ve never looked back.
Being a self-proclaimed word nerd, I revel in word clues, feeling a smidge of smug satisfaction when all the spaces are filled in.
There is some buzz on the medical front that doing crosswords staves off the onset of Alzheimer’s. Other experts are saying the activity of putting pen to paper engages the human brain in ways our handheld devices cannot.
Still others say it’s a great and entertaining way to improve your vocabulary.
Here’s why I love puzzling with words: the clues are mini commentaries on life.
I was working a puzzle the other day. In the “Across” column, the hint was, “protects the petals”. The 5-letter answer was just beyond my reach, but in short order I had the first letter, “T”. After a bit of maneuvering in the “Down” category, I had my answer. Thorn.
Thorn protects the petals, as in the petals of a delicate, fragile rose.
That pithy little phrase, “protects the petals”, became a metaphor in my heart’s memory. My late husband, Roger, was a tall guy with a hearty laugh and a fierce love for his family. In some ways, he was gruff and prickly – like a thorn. After you got to know his personality, you realized it was his outward protective way of sizing up each new situation, ensuring everything was okay.
Just like a thorn discourages a would-be picker from grabbing the rose, so a giant of a man in his Sheriff’s blues, shields the vulnerable; the defenseless; the unguarded ones.
And, just as a bramble keeps intruders at bay, so Roger shielded “his girls” (our daughters and myself) from anything untoward.
The one thing he could not protect us from was his own untimely death, 10 years ago.
In the space of one devastating moment, we three girls were knocked sideways into a jarring reality. We became vulnerable to unwise counsel, harsh comments, impossible decisions and predatory people. Our shield, our buffer, our go-to-guy, was gone.
Worst of all, we developed barbs against one another in order to protect our own shattered hearts.
Thorns. Protecting the most precious flowers, people, and dreams.
All this clarity came marching into my awareness, just because of a crossword clue. Who knew?
All word nerds know, intuitively, that words are a map. They are clues. They are pieced together like one messy, random puzzle. Ultimately, the words make sense. This is magic.
One puzzle offered a clue. That clue triggered a memory. That memory throbbed warm and alive in my heart.
I will always remember him in new ways.


Plus, now I have a new appreciation for the solemn trustworthiness of thorns. 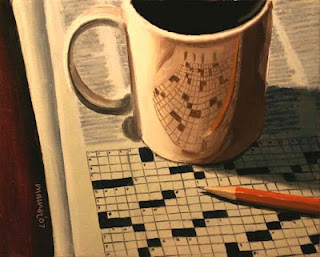